The MARY MAERSK's voyage with record cargo on board

The MARY MAERSK's voyage with record cargo on board

The MARY MAERSK has established a new world record transporting the largest number of containers from Europe to Asia.

On the 21st of July the third vessel in the Triple-E series sailed from Algeciras, Spain and set course for Tanjung Pelepas, Malaysia. The MARY MAERSK was loaded with 17,603 twenty-foot equivalent units - the highest number ever loaded on a vessel.

A nominal capacity of the MARY MAERSK - 18,270 TEU has not been fully used before. The terminals have to provide the added size to allow the load and discharge of the Triple-E vessel cargo. So Algeciras has been preparing for the record loading for more than one year. Preparation included the upgrading of four existing cranes and the delivery of new Triple-E cranes. The port of Tanjung Pelepas had to provide the similar improvements.

As reported by the captain of the MARY MAERSK, the crew of the vessel was proud to be a part of the world record. He also mentioned that the containers on board were loaded with a variety of products, such as Danish cheese and pork meat, frozen beef meat from Germany, frozen fish, chocolate and sweets, frozen berries, fruits and many much more. 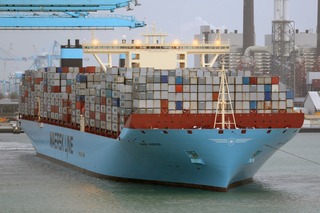