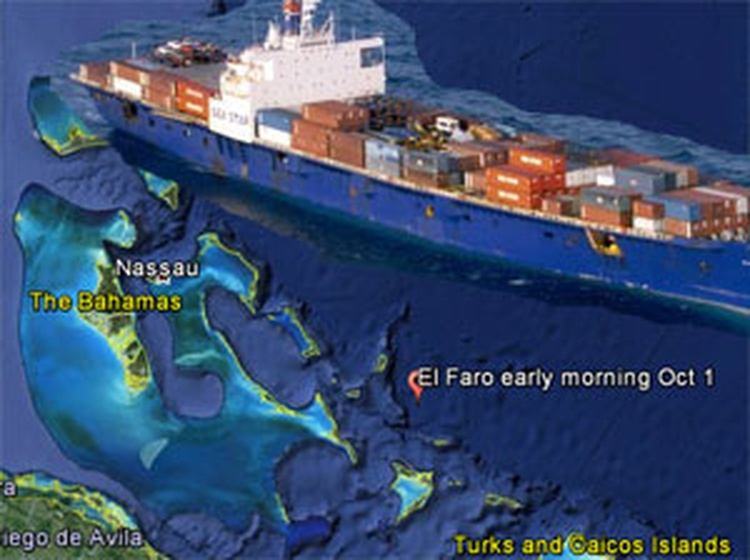 No signs found of either El Faro, or its’ crew, as of morning Oct 5. There’s no reasonable doubt in believing that the vessel is a loss, but there’s still a tinge of hope, that some of the crew are still alive and may be rescued, though hope is diminishing with each passing hour. It is more or less understood, what happened to the vessel, she capsized. We don’t know, and maybe won’t ever find out, the exact chain of events. Vessel may lose power due to engine failure and then develop a list after opening its’ side to devastating waves battering, or it may be the other way around – vessel developed list due to cargo shift, and then lost power. Most probable, though, is the second assumption, judging from available AIS track. El Faro was steaming full ahead at some 19 knots, then reduced her speed down to 10 knots, and then was lost. Vessel encountered heavy seas and the cargo, almost undoubtedly, vehicles on ro-ro deck, shifted, causing a list. Heavy list caused engine stalling, and disabled ro-ro vessel caught in hurricane was simply doomed. The catastrophic outcome was a question of time, and not a long time, with that. Hours at most.
Nature once more demonstrated its’ mighty power, dwarfing our progress and modern technologies. Nature can’t be taken easily, whether we encounter it on board of sailing yacht or on board of a modern ship.

Previous news:
El Faro disappearance – Captain to blame?
At approximately 7:30 a.m. Oct 1, Coast Guard Atlantic Area command center in Portsmouth, Virginia, received an Inmarsat satellite notification stating the El Faro was beset by Hurricane Joaquin, had lost propulsion and had a 15-degree list. Vessel was near Crooked Island, Bahamas, en route to San Juan, Puerto Rico, from Jacksonville, Florida. The crew reported the ship had previously taken on water, but that all flooding had been contained. Since then, communications were lost. A full-scale SAR is under way, engaging planes, helicopters, USCG cutter and all ships in the area. The crew consists of 28 U.S. citizens and five Polish nationals.
From the latest statement from ship’s managing company:
As of 720am EST on Thursday October 1, TOTE Maritime Puerto Rico lost all communication with the El Faro. TOTE Maritime Puerto Rico is working closely with the U.S. Coast Guard and all available resources to establish communication by whatever means possible.
Comment:
Most probably, there was cargo shift on board caused by heavy pitching and rolling. If no miracle happened, like all communications including ERB destroyed, vessel capsized and either sank, or drift bottom up. In any case, it should be capsizing, nothing else can account for sudden loss of all communications and no distress signals from ERB.
The main cause of the disaster, as of now, considering all available information, seems to be Captain’s decision to ignore hurricane and continue voyage, not seek shelter from passing hurricane.