A Baltic diesel cargo loaded from the Baltic port of Ventspils, Latvia, on the tanker Green Sky is estimated to arrive at Buenos Aires in early April, based on vessel tracking information.

The tanker loaded 32,000 tons at Ventspils around March 12 and signals via AIS indicate it will arrive at Buenos Aires three weeks from this date.

This is the first Ventspils-Trans-Atlantic diesel cargo identified since 40,000 tons was loaded for shipment to New York back in Jan. 25, according to information compiled from the OPIS Tanker Tracker.

The three Ventpils shipments going directly across the Atlantic to New York have all been for Vitol, which controls the Baltic's largest oil storage tankers at the Latvian port.

Vitol loaded three U.S.-bound ships at Ventspils around Nov. 6, Dec. 15, and Jan. 25. Each of the ultra-low-sulfur diesel/gasoil cargoes was around 40,000 tons. All sailed to New York presumably for the low-sulfur-heating oil market.

The last Ventspils shipment seen going to Argentina was the tanker Bow Elm, which tracking data showed loaded on Nov. 27 (cargo size estimated at 34,000 tons) and then arrived in Buenos Aires Dec. 20 of 2015. 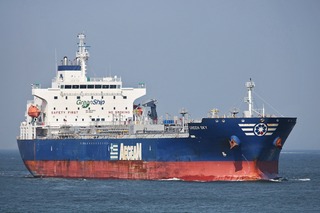