85 years of Amerigo Vespucci in Trieste 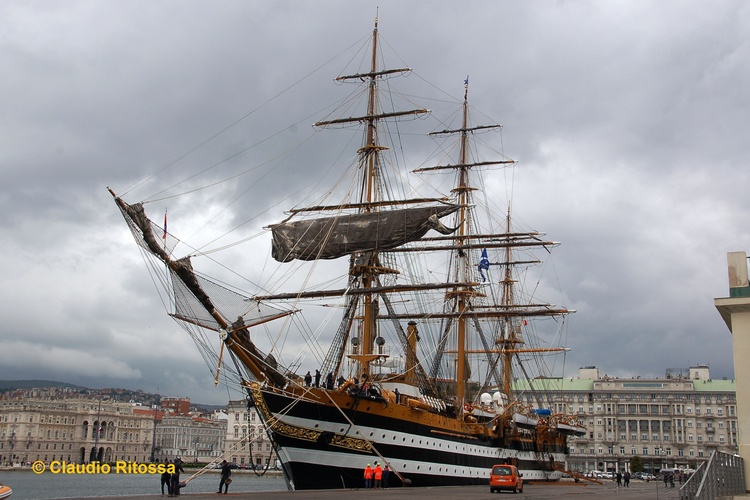 It arrived today in Trieste the "AMERIGO VESPUCCI" coming from La Spezia after two years spent in the shipyard ..

The work focused on the hull and replace engines.

It is presented in full form, ready to celebrate in our city his eighty-fifth birthday. School ship Amerigo Vespucci, the oldest unit in service in the Navy completely built and set up at the Royal Shipyard of Castellammare di Stabia. Set the hull May 12, 1930, it was launched February 22, 1931; Godmother to the ship was Mrs. Elena Cerio. Delivered to the Navy 26 May 1931, entered service as a training ship the next 6 June, joining her sister ship Cristoforo Colombo (actually slightly smaller), three years older, and forming with it the "School Division Ships" to command of Admiral Cavagnari. After returning from the first Campaign of Education, October 15, 1931 in Genoa he received the Combat Flag, offered by local UNUCI Group (Official National Union Dismissal of Italy).

The motto of the ship is "not who starts but what perseveres", awarded in 1978; Originally the motto was "For the Fatherland and for the King", which belonged to the previous Amerigo Vespucci, replaced the first time after the Second World War, with "Firm in the fury of the winds and events", finally with the current one.

From technical and constructive point of view the Amerigo Vespucci is a ship sailing with the engine; from sailing equipment point of view is "armed to Ship", so with three vertical shafts, jib, main and mizzen, all equipped with masts and square sails, longer bowsprit protruding at the bow, in effect a quarter tree. The unit is also equipped with cutting sails: the flakes, in the bow, between the bowsprit and the foremast, the stays, between the foremast and teacher and between main and mizzen, and the mainsail, with boom and peak, on the mizzen.

The port allocation is La Spezia.

Dependence Organic / Operating Unit is CINCNAV (Command-in-Chief of the Naval Squadron) from 14 October 2013.

Since its entry into service the ship has carried out training activities every year (with the exception of 1940, due to the war, and the years 1964, 1973 and 1997 for overtime work), mainly in favor of the Naval Academy students, but also students of the Naval College, now Naval Military School "Francesco Morosini", the pilots students as well as young people are part of sailing associations, such as the Italian Naval League, the Sail Training Association - Italy and also the ANMI.

In addition to numerous short campaigns in the Mediterranean, carried out mostly in the spring and autumn period, from that of 1931 to that of 2013 Amerigo Vespucci has performed well 79 Campaigns of Education for the Students of the 1st Naval Academy Class of including 42 in Northern Europe, 23 in the Mediterranean, Eastern Atlantic in 4, 7 in North America, one in South America and 2 within the only circumnavigation of the globe, carried out between May 2002 and September 2003, a period in which the ship has been involved in activities related to the edition of the America's Cup 2003 in New Zealand.

The Education Campaigns, held in the summer, with an average term of three months and affect mostly foreign ports; During these campaigns, therefore, the activities of the ship, eminently formative-addestrativa, enriches the appearance of presence and representation (which the Naval Diplomacy), affirming the national image and the Navy abroad.

As regards the educational aspect-a Training, the boarded Students are taught the basic rules of life at sea, as well as more specific skills in various fields: nautical, Unit conducted (including the use of the sextant to make the point ship), conduct engine and auxiliary apparatus, the logistical issues management, administrative and medical. For this purpose, in addition to practical training, organizes conferences and lectures given by more experienced crew members; the learning level is then determined at the end of the campaign by means of written and oral tests.

The hull is of the type with three main bridges, continuous from bow to stern (indoor, battery and corridor), more various partial bridges (tables); It has two main superstructures to forecastle and quarterdeck aft, which rise on the main deck, but that ideally are continuing. The characteristic black and white color emphasizes the reference to the past: the white bands at the drum bridges and hallway fact recall the two cannons lines of nineteenth-century vessel type to which the designer was inspired.

On the bow of the ship is the figurehead, representing Amerigo Vespucci, made of gilded bronze. Feature of the ship are the bow and the stern arabesque ornaments, wooden covered with pure gold leaf.

The planking is composed of steel sheets of different thickness (12 to 16 mm.), Connected by riveting to the ribs, which constitute together with the keel beams and to the backbone of the ship. This system ensures the necessary flexibility to the hull girder; the impermeability of the whole is ensured by close contact between metal and metal, strongly compressed by the dense nailing, which must then be made in a workmanlike manner.

All trees, including the bowsprit, are constituted by three trunks, of which the first two steel (also made by means of bolted plates), the third, called mast for vertical shafts, of controfiocco auction for the bowsprit, is in wood (douglas). The yards follow the same design philosophy: the lower three are steel, the two wooden superiors. As regards the mainsail, the boom is made of steel while the peak is in wood. Many other parts of the ship are made of wood, diversified depending on the required characteristics: teak for the deck, the rail and the wheelhouse, mahogany, teak and holy wood for marine equipment (pazienze, ankles and blocks), ash for gratings, oak for the furnishings of the Square Officials and Officers accommodation, mahogany and walnut for the Board room. The length of the floating ship is 82 meters, but between the extreme stern and the end of the bowsprit will reach 101 meters. The maximum width of the hull is 15.5 meters, arriving at 21 meters considering the clutter of boats, which protrude from the side, and at 28 meters considering the ends of the longest flagpole, the teacher trevo. The maximum draft of 7.3 meters.

The trees, previously described, are kept in position thanks to the steel cables (fixed or dormant maneuvers) that support them towards the bows (stays) towards the sides (shrouds) and aft (backstay). On the stays they are also inferred flakes and sails of forestay. Tree height above sea level is 50 meters for the foremast, 54 meters by 43 meters by the teacher and the mizzen; bowsprit protruding for 18 meters.

The three vertical shafts each carry five yards, a characteristic name, also common to its sail: on the foremast are, from bottom, trevo jib system, fixed parakeet, parakeet steering wheel, velaccino and controvelaccino; on the main trevo mainmast, fixed cage, the cage wheel, velaccio and controvelaccio; trevo on mizzen mizzen, contromezzana fixed, contromezzana steering wheel and lookout controbelvedere. The trevo mizzen is normally kept unprotected from sailing (which would take away the wind trevo the teacher) and then takes the name of "dry rod". In each tree, the two lower spars are fixed (can only rotate on the horizontal plane), while the three upper can slide on the shaft and are raised at the time of the sails.

Regarding the cutting sails, the rigging has five sails at the bow (little bird, controfiocco, bow, bow and large foresail), four sails forestay (the cage, velaccio, mizzen, Belvedere) and the mainsail. At this "set" the sails, always "ready to use" can be added, if appropriate, scopamare two square sails hoisted the sides of trevo jib system, using appropriate extensions of the flagpole. With fully Ship sail area you can reach considerable speed, at least in relation to the weight of the same: the "record" is 14.6 knots.

The total sail area (24 sails) is approximately 2635 square meters. The sails are of sailcloth (thick hemp fabric) lies between 2 and 4 mm and are made joining by sewing more strips (panels).

The maneuver the sails is implemented by means of cables (current or flying maneuvers) of different diameter, for a total of about 36 Km .. They too have characteristic names, such as halyards (to raise the movable spars and the cutting sails) , arms (to orient the yards), sheets and walls (to fix the lower corners of the square sails, downwind and upwind, respectively), cheating (to raise the sails on the yards), etc .. the running rigging for most in manilla (plant fiber); exception of the sheets trevi, that to support the high effort are made of nylon. In addition to that the sailing equipment includes about 400 blocks in wood and 120 iron.

Real "engine" of the Amerigo Vespucci is his crew, made up of 264 soldiers, including 15 officers, 30 non-commissioned officers, 34 sergeants and 185 Seamen and municipalities, divided into the services operations, seamanship, Detail / Weapons, Naval Engineers / Electrical, administrative / Logistics and Health. During the Campaign of Education the crew is all integrated effects by students (about 100 a year) and the Naval Academy support staff, reaching around 400 units.

Each service has its special duty on board: the Service Operations is in charge of navigation, using the equipment of the vessel is provided (radar, depth sounder, GPS), meteorology and telecommunications; the sailor's Service is responsible for use of sails, with owning and enforcement of mooring and unmooring maneuvers; Detail includes the service staff who coordinates the daily Unity services and manages the personal practices of the crew; the Weapons Service has over the small arms and crew provides training to their employment; the Naval Service / Electrical engineering ensures the machinery run and auxiliary equipment, the production of electricity and maintaining the integrity of the hull; the Administrative Service / Logistics deals with the capture, settlement and distribution of materials, drafting of legal documents and the management of the kitchens; the Health Service, finally, deals with the prevention and care of the staff. It is worth emphasizing that the full commissioning Unit sailing, acting simultaneously on the three trees ( "place of general maneuver to Sail"), is only possible with the boarded students, who traditionally are used on the main and mizzen, while the staff nautical service, the helmsmen, deals with the jib as well as the coordination and control of activities on the other two trees. In the absence of the Students, the maneuver is accomplished by employing a pilot entire staff on the trees ( "shore") and by allocating to the cable operations staff of the other free services from other tasks.