Two major accidents with US and Russian Navy ships in less than two months: more to come 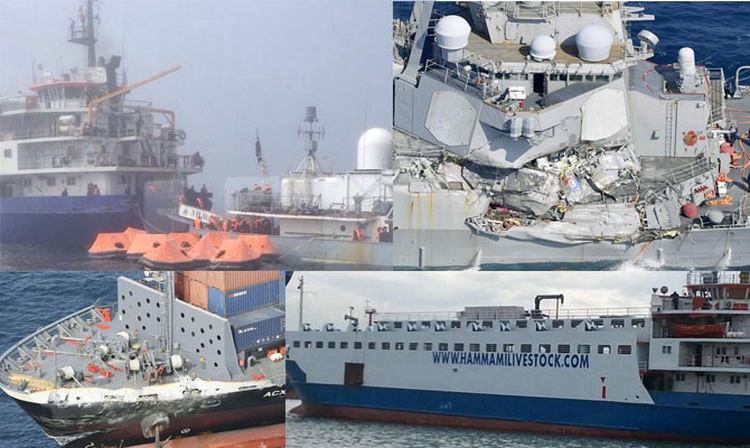 During less than two month period, two major accidents occurred, under similar circumstances, involving merchant ships and Navy ships. With things as they are, such accidents are a question of simple statistics, i.e. they’re bound to happen.

Understandably, heaps of analyze, home-made investigations and mostly, sheer speculations, were and are written, aired and published, in mass attempts to understand, how could that USS FITZGERALD vs. ACX CRYSTAL collision tragedy happen. I found most interesting an article ““Internet of Ships” tells tale of USS Fitzgerald tragedy—or half of it”, written by Sean Gallagher and published by ARS Technica https://arstechnica.com/information-technology/2017/06/internet-of-ships-tells-tale-of-uss-fitzgerald-tragedy-or-half-of-it/, though I am afraid, author’s analyze is kind of unfinished, first part of the story.
There was an accident recently, which bears apparent similarities with USS FITZGERALD vs. ACX CRYSTAL collision. I refer to the collision between Russian Navy ship LIMAN and Lebanese live stock carrier YOUZARSIF H, which took place on April 27 on Bosphorus Strait outer Anchorage in Black sea, on Apr 27 this year. LIMAN sank, 78 crew were rescued by YOUZARSIF H and by Turkish Coast Guard and Navy.

In areas such as approaches to Bosphorus, or the one where USS FITZGERALD collided with boxship, movements of most of the vessels, first of all we’re talking merchant ships, are easily predicted – with traffic separation zones, with known routes, with recognizable patterns of this or that vessel or size of vessels.
But nobody can say what’s on the mind of Navy ship (or fishing vessel, especially if it’s a coastal fishing vessel), what is it they’re up to, what will be their next move, speed or course. And of course, let’s not forget, that modern merchant marine officers grew so accustomed to recognized and identified marks on their radars, that a radar blip, without any identification provided, may simply confuse them – is it real, or is it disturbance signal of some kind, or what.

LIMAN case is more of an anecdote (as in many Russian Navy related stories), than of tragedy or disaster. We don’t know still, what was the status of the ship: was she under way, or anchored. There’s no official statement from Russian Navy. Instead, Russian Navy inspired a number of publications in Russian media, which are trying to blur the whole picture and slate Lebanese merchant ship as the main and only culprit, though the details given by such publications, just didn’t stand any scrutiny – didn’t stand at all. All publications are based on analyze, provided by mostly, rear admirals or military experts. One can’t but wonder, where did those admirals and experts come from, and did they ever see ships at sea live, let alone be on board or in command. Read in full here: http://maritimebulletin.net/2017/05/05/livestock-carrier-youzarsif-h-as-a-personal-enemy-of-russian-navy/

I have no doubt, that USS FITZGERALD vs. ACX CRYSTAL accident will be investigated as thoroughly, as humanly possible, and that the guilt of both ships and people on the bridge will be weighed on molecular scales, providing us with full understanding of the mechanisms of this accident. I have doubts though, that the investigation will go further than that, to a broader scale, to basics of such accidents. I believe, ships and boats can’t be equal and aren’t equal, contrary to COLREGS basic approach – at least in some areas. It’s not just and it’s plain dangerous, not globally, but in areas with heavy traffic, consisting mainly of merchant ships of all types and sizes. They should be privileged, navigational rules in such areas should prioritize merchant marine ships, and make them immune to some COLREGS rules.
Investigation of USS FITZGERALD vs. ACX CRYSTAL accident, no doubt, will come up with some conclusions and recommendations, with a high probability of begetting new regulations and requests, imposed of course, on merchant marine, by regulations/restrictions-happy international maritime bodies.
Will it make shipping safer? Of course no. Number of regulations, restrictions, recommendations and amendments to regulations, restrictions and recommendations, went beyond control and common sense long time ago, any new ones just don’t make any practical sense, on the contrary – they make situation worse than it already is.

The only way to make coastal waters more safe, at least from risks imposed by Navies and fishing vessels, is to work out new rules and restrictions for Navies and fisheries, and enforce them.
There is no equality between Navy/fishing ships, except biggest ones or damaged, and merchant marine ships, when we’re talking about navigating in coastal waters with high-density merchant shipping. Merchant ships aren’t designed for maneuvering around in a way Navies and fisheries do it. Merchant marine ships, more often than not, in case of a major accident, are a great hazard to coastal waters and coasts, thanks to their cargoes, from crude oil to explosives and hazardous substances. Merchant ships are endangered not just and only by Navy ships and fishing vessels themselves, they’re endangered by necessity to maneuver in order to avoid collision with Navies and fisheries. Any unexpected maneuver, caused by any emergence, in heavy traffic zones, is a risk in itself, endangering ships nearby. In other words, it’s much safer to oblige Navies and fisheries to give way to merchant ships and not to harass them, notwithstanding COLREGS general rules. It’s safer for everyone and everything, including coastal States.
At the very least, Navies should identify themselves on AIS, somehow, in a way which still can keep exact ships’ names secret. They must be banned from performing their murky duties, like that Russian spying thing, in areas where merchant shipping carries out it’s main and only duty of providing world and coastal economies with vitally important cargoes.

Fishing vessels are a different story, especially in some countries. Policy of some States towards international shipping is simply a shame, as dangerous, as your piracy. It often, actually, is a disguised form of a piracy, and I for one, have some sound reasons to believe, that some too inventive fishermen (backed by local authorities) intentionally expose their boats to collision, for obvious reason of getting a hefty compensation, which may exceed all their past and future earnings, taken together. It’s impossible to regulate them, but it’s possible to make them responsible for collisions in heavily trafficked zones, COLREGS or not. A fishing boat size of a lifeboat of supertanker, just can’t, out of any sense including common, be equal to that supertanker, and demand from VLCC to give way, because that’s what COLREGS say. It’s nonsense and it’s absurd, and most of all, it’s dangerous for everything and everybody around (and fishing grounds, too, if oil spill occurs).

During less than two month period, two major accidents occurred, under similar circumstances, involving merchant ships and Navy ships. Routine road of new advises, or worse, regulations, ensuing from routine investigation into USS FITZGERALD vs. ACX CRYSTAL collision, is a road to nowhere. Shipping won’t be a bit safer after that. With things as they are, such accidents are a question of simple statistics, i.e. they’re bound to happen.

Basically new approach is needed, to make merchant shipping safe from Navies and fisheries, but who’s to work on it? Such a job requires reputable and responsible international maritime institution (plus media), capable of lobbying merchant marine interests on a global level. There is no such institution (media) in sight, and won’t be, in a foreseen future. Existing bodies lobby and defend any interests, but merchant shipping (mainly their own, I believe, personal and corporate).