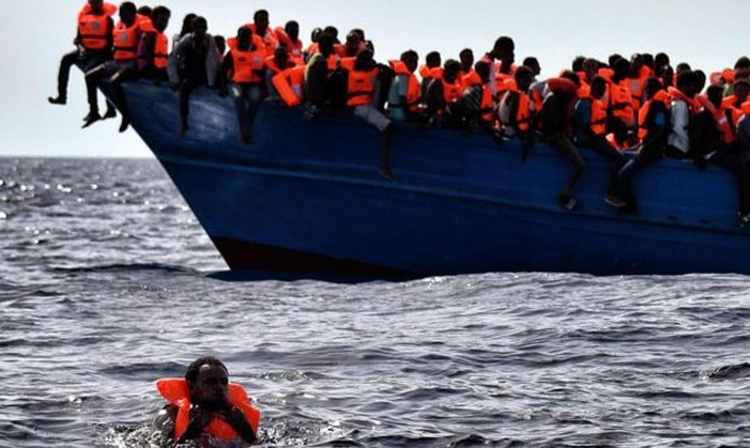 Media, politicians and NGOs lashed out at a hapless “fascist” C-Star ship, chartered by “far-right” organization “Generation Identity group”, to monitor NGOs and their activities in rescuing migrants, amid growing mass resentment against illegal migration. Pro-migrant activists and NGOs oppose the deployment of the C-Star, arguing that its presence could endanger lives. Italian government’s draft of a “controversial” code of conduct for charity boats carrying out migrant rescue missions also is under fire, and the reason again, is that the Code puts “more at risk of drowning”.
Let’s try to figure out, what’s going on, and who’s putting “more at risk of drowning”, using logic and common sense.

The majority of migrants consists not of people who flee war-torn countries, or because they risk political persecution (statistics can be easily found). It’s an opportunity to move to much more wealthy and comfortable countries – a chance, which migrants didn’t have before. According to laws of any country, such kind of migration (purely economical) is illegal, it is to be stopped, and violators are to be expelled. But after Libyan and Syrian chaos and wars, all those who looked for a chance to get to Europe, got the chance, under the disguise of “Syrian refugees”.

All those who’re trying to reach European coast know risks involved. They also know the rules of the game – say, if there’s merchant ship nearby, the best way to be “rescued” is to imitate disaster (which is by the way, violation of international maritime laws). They understand all risks and perils, they accept those risks, and pay for the journey. They’re taking their children with them, jeopardizing their lives as well. Strictly speaking, that fact alone makes them perpetrators, because they jeopardize kids, from toddlers to teenagers, while pursuing their materialistic objective. They risk their own lives, and lives of their children, not because they have no other options – either flee, or die, - but because they want a better living. Everybody wants a better living, but some people want it at any cost and on anyone’s else account, and some have some scruples about it.

The only way to stop that exodus to Europe is to ensure, that the majority of migrants will be sent back, without as much as even putting a foot on European soil. When all those who’re planning to migrate see that the chances are not in their favor, they – the majority of them at least, - will drop the whole idea. Technically it was and is possible, though with each passing day the costs are rising.
We hear and read on an everyday basis about new tragedies and disasters, befalling migrants. As long as it’s illegal trafficking, tragedies are inevitable. As long as potential migrants know, that “illegal trafficking” is not exactly illegal, and they won’t be turned back, they’re sure to try that deadly lottery, in ever growing numbers. The more are the numbers of illegal trafficking, the more are the chances of disaster.

Situation has become absurd. Everybody knows that this migrants flood is, in its’ overwhelming majority, economical, i.e. illegal. But officially it is not recognized as such, there’s just no explanation at all, and there’s no publicly known plan how to deal with it, either. Media are talking about humanitarian disaster, numerous deaths at sea, and urgent need of more resources to rescue, help and assist illegal migrants. Meanwhile, numerous NGOs moved in, making situation near helpless.

All of them taking together – NGOs, media, politicians and international organizations, in fact, encourage illegal migration, and with that, generate more tragedies. On the face of it, they are all rescue, salvation and humanism. Actually, they do everything they can to keep trafficking going and growing, in its’ most dangerous, ripe with disasters, way – the way it’s going now.

NGOs are asking European countries to crackdown on human traffickers, trafficking boats and traffic criminal rings, but it’s a pathetic and meaningless plea, if not a hypocrisy. It’s a huge, very huge market down there, with millions of people eager to get to “promised land” of Europe, and ready to pay for the passage. If there’s a demand, there always will be an offer. One boatload of migrants will leave smugglers with enough profit to buy a new car and along with it, build 10 or more new boats, and send them, full of new “customers”, to their dangerous journeys and murky fate. Smugglers don’t care, if boat will reach Europe, or sink, whether its’ passengers will sink with it, or will be rescued – they already received the money for the passage.
Smugglers don’t have to steer each and every boat personally, in our times of GPS anyone, any migrant, literate enough to read GPS screen, can navigate (for a reward in form of reduced passage fee, or maybe free passage) the boat on its’ one-way, one straight line trip, no big deal.

Trafficking market is swarming with small-time smugglers using their own boats, mostly yachts, they’re the main catch of Coast Guard and police, but their share in overall trafficking volume is sheer peanuts, compared to that industrial-level traffic conveyer of big-time operators. All those fights and crackdowns on traffickers will raise the cost of passage and in all probability, make the journeys more risky. Most importantly, smugglers prosecution won’t reduce migrants volumes, and because of that, it’s a waste of time and resources, and generally, a distraction.

Don’t NGOs understand it, do they seriously believe, that “fighting traffickers” will reduce the traffic, are they that naïve? But no, NGOs meddling in Med seem to be run by very practical people, capable of organizing operation, which in this year only brought to Italy more than 30,000 migrants, out from total 100,000. Such an operation can’t be carried out by naïve, soft-bodied idealists, it requires hard-nosed heavyweight professionals.

How do NGOs and those media and politicians, who support them, see it all in general, in time perspective? What is their logic? Is Europe to host all those who’re willing to migrate to Europe? Are there any restrictions, is there any selectivity – say, for the time being only Africa and Middle East are welcome, with the rest of the world to be hosted later? If that’s their plan, why don’t they voice it, loud and clear, and demand from EU to establish free ferry services for all wishing to migrate? They’re talking all the time about “safety of the passage” – but that’s the only way to make passage real safe. Other options, including NGOs rescue operations, are not safe and won’t be safe, ever. With growing number of migrants, passage is becoming more and more dangerous.

From the point of view of maritime rescue and safety, NGOs activities generate tragedies, not reduce them. Those who’re trying to stop migrant flood, are saving future victims from future tragedies (including “fascist” ship C-Star). Those who encourage people to migrate, by supporting their illegal actions, and by inspiring hopes for “safe passage”, are contributing to future tragedies. The more people they rescue, the more people, inspired by “happy-end” stories, NGOs, activists and media, undertake those perilous journeys and run into trouble. The ongoing scheme of dealing with migrants trafficking is in fact, a perpetuum mobile, producing disasters.
Incidentally, NGOs alleged collusion with traffickers doesn’t strike us as something unthinkable and impossible. Somehow, we are not awed. Let’s hope Italian authorities will have enough guts and determination to push the investigation through, and find out the truth.
Incidentally, “far-right” activists didn’t yet turn away any migrant boat, or torpedoed it, or whatever. They want a solution, realistic and plausible plan to deal with crisis and stop ongoing madness.

And of course, NGOs constant demand for merchant marine full-scale involvement in rescue operations is nothing short of outrageous. Such an involvement endangers not only crews, ships, passengers and cargoes, it endangers coastal States as well. Imagine hundreds of migrants on board of a big tanker, or dry cargo ship loaded with dangerous goods. Imagine the scale of possible disaster. Any outsider on board of a modern ship is a source of possible accident. And we’re talking about total strangers, not one-two-several stowaways, but dozens and hundreds of strangers, who may (there were precedents) turn hostile, who may light a cigarette on a cargo deck of a tanker – who may do a lot of things, which may spark off a major disaster. Migrant boats’ disasters just don’t fit into typical maritime disaster categories, theirs are self-made disasters, on a scale, which is defying the, once sacrosanct, laws of the sea.