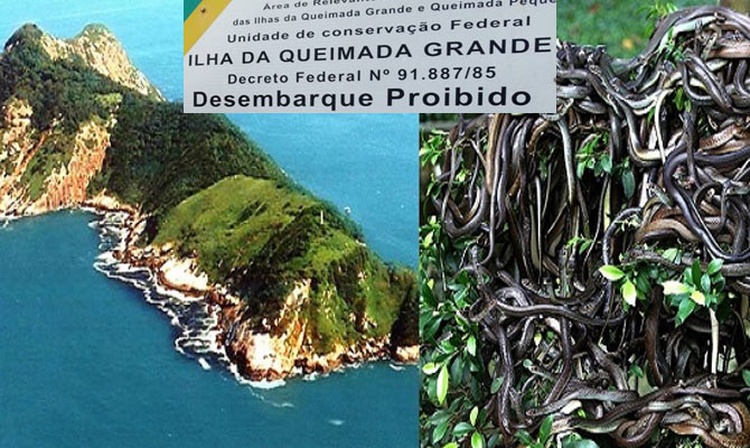 Snake Island, or Ilha da Queimada Grande, located approximately 33 kilometres off the coast of the state of Sao Paulo, Brazil, is considered to be one of the most dangerous places on Earth. It is estimated, that there’s 1 snake per each square meter of island’s total 430,000 square meters, among them some 2,000 to 4,000 golden lance head vipers, one of the deadliest snakes in the entire world. These vipers’ venom can kill a person in under an hour. Island is uninhabited for a long time, and closed for visits or tours, available only for Brazilian Navy and for research teams, granted special permission on every occasion. An unprotected and untrained person wouldn’t last long, before being hit with a fatal bite.
On Feb 27 this year, a small fishing boat with 6 fishermen while fishing in the vicinity of the island, was caught in storm, and started to sink. 4 fishermen decided to swim ashore, 2 were too afraid, and remained in the boat, never to be heard of again. 4 people safely reached the shore of the island, knowing all too well its’ reputation. They stayed on island for 3 days, and survived. How?
All the time they have been on island, they remained on the beach, and didn’t enter, even for the moment, forest which surrounded the beach. They’ve been drinking rain water and eating bananas they cautiously picked up on forest fringes. After 3 days of the horrific ordeal, they spotted a boat approaching island, and rushed to sea to swim for it. Boat with 8 tourists and diving instructor picked them up on Mar 3, and delivered to Emergency Care Unit.
Just imagine what it was like, to survive on the border, on the very edge of a hell, in the open, being so near to shelter (forest, caves, lighthouse), yet unable to reach it, because there is no chance to walk around, and stay alive.