Container ship MSC MATILDE developed starboard side list being berthed at Liverpool, crew went to shore, as a precaution, at around 0200 LT May 24. "Crosby Coastguard Rescue Team and the RNLI Hoylake all weather lifeboats have been sent to the scene, two tugs and a tier 2 pollution response vessel are on standby as a precautionary measure” – said MCA spokesperson.
MSC MATILDE arrived at Liverpool on May 22, from Canada.
MSC official Statement:
Early Friday morning on 24 May, the container ship MSC Matilde was found to be listing in dock at the Port of Liverpool, UK. As a precaution, to ensure the safety of the captain and crew, they were disembarked from the vessel. There were no reports of injuries, loss of cargo or damage to ship and operations are back to normal. The cause of the incident is still being analysed by the relevant authorities.

UPDATE: MSC MATILDE had 2,184 containers on board, at the time of accident. After ballast management, the ship returned to even keel, crew boarded at around 0800 LT, cargo operations to renew later in the day. 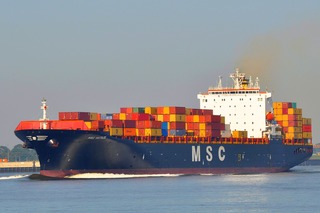