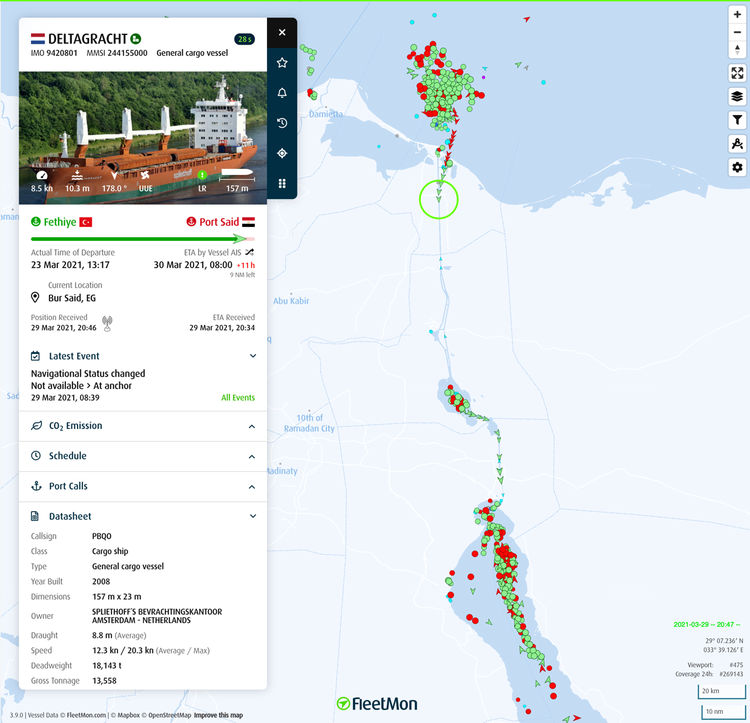 After nearly a week of waiting for some positive news to arise out of Egypt's Suez Canal, billions around the world received their first reassurance after an announcement by the Suez Canal Authority. They declared that Ever Given, owned by Taiwanese shipping giant Evergreen, has been partially refloated.

As per reports, authorities cashed in on the high tides overnight, who managed to correct the course of the 400m-long vessel by 80%.

The news of the ship being partially free raised faint glimmers of hopes in the international shipping community. An estimated 369 vessels, including scores of container ships, bulk carriers, oil tankers and liquefied natural gas (LNG) or liquefied petroleum gas (LPG) vessels were waiting to transit the canal, as per SCA Chairman Osama Rabie.

Leth Agencies, a leading Suez Canal shipping agency reporting on the vessel congestion at Suez said 154 were anchored at Port Said, 42 at Great Bitter Lake and 171 were near the port city of Suez.

He continued, “It is very possible that by today noon shipping activity would resume, god willing. We will not waste one second.”

However, Peter Berdowski, CEO of Boskalis, the salvage firm hired to extract the Ever Given, was more realistic when it came to handling expectations and deadlines. “Don’t cheer too soon,” were his words as he spoke to Dutch NPO Radio 1.

Exciting day at the Suez Canal, relief and refloating of EVER GIVEN succeeded and traffic is picking up slowly again.

While EVER GIVEN has found her new position in the Great Bitter Lake, Southbound traffic is picking up again.

Mainly livestock carriers are first together with ultra-large container vessels. Back to normal will take a couple days,

when authorities decide to open the canal 24/7.

Mar 29 1530 UTC UPDATE: The ship is already in Great Bitter Lake, proceeding it seems, under own power, and escorted by tugs. Expecting Canal traffic to resume any time soon.