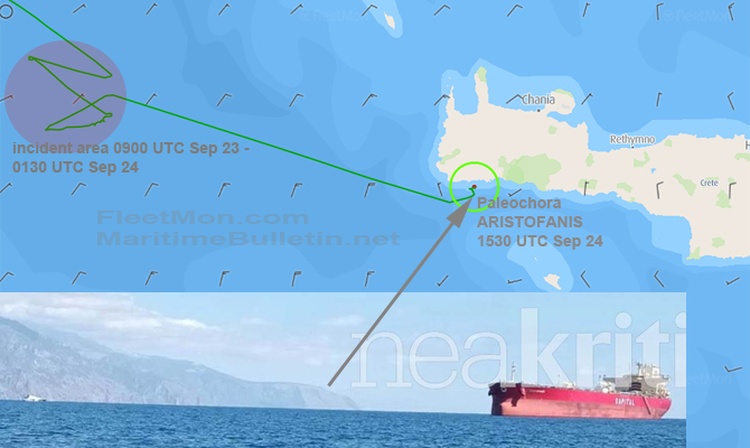 Sep 26 UPDATE: Migrants reportedly were disembarked on Sep 25, tanker left anchorage and is sailing to port of destination Sidi Kerir, Egypt. Take a look at photo with migrants on cargo deck of crude oil tanker in ballast and imagine what may happen if/when somebody smokes near vents of tanks which are most probably, full of gas. 150 migrants mainly men, mainly smokers, having no idea, nor care, about fire safety. According to Greek media, tanker was ordered to pick up migrants, from overcrowded but not sinking, vessel. Who’s giving such to say the least, irresponsible orders, and who’s to be held responsible if disaster occurs? Sep 25 UPDATE: As of morning Sep 25, disembarkation status of migrants on board yet unclear. Understood group of 5 migrants agreed to disembark in order to find out, “if disembarkation will be safe”, writes local news outlet Creta24.gr. Agreement was achieved after many hours of standoff and talks with authorities. No reports on ship/crew status and condition, but most probably, they’re ok and more or less safe, albeit uneasy and uncomfortable.

Aframax crude oil tanker ARISTOFANIS, ballasting from Italy to reportedly, Egypt (Suez Canal most probably), got caught in migrants rescue operation in the evening Sep 23, some 95 nm west of western Crete. Tanker happened to be near distressed boat with some 150 migrants on board, and though details weren’t revealed, understood was ordered to assist, so ARISTOFANIS took on board all migrants and after several hours of waiting (or a standoff between Greek authorities and migrants, it’s not clear), sailed to Paleochora anchorage, southern Crete, where she anchored in the morning Sep 24.
Migrants are supposed to be disembarked at Paleochora, but according to local media neakriti.gr, operation may not come smooth and easy – migrants want to be transported to Italy. Understood there was a standoff shortly after rescue, when migrants found out, that the ship was bound for Egypt. They either refused to disembark, or worse, details remain unclear.
As of 1600 UTC Sep 24, it remained unknown, whether they agreed to disembark, or insist on being transported to Italy. 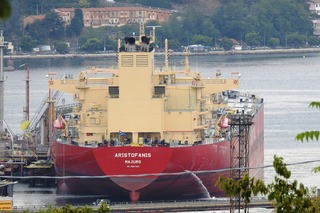