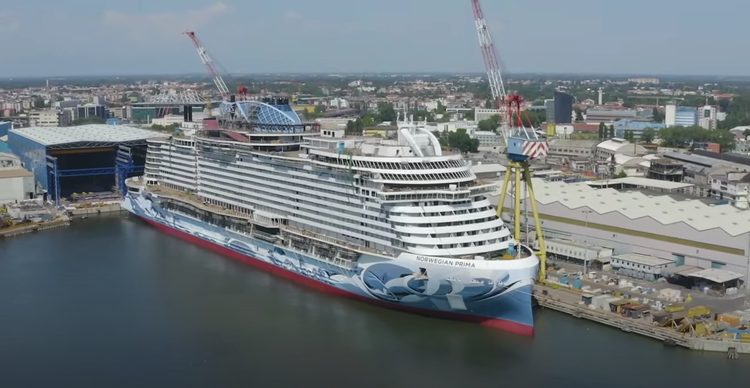 Norwegian Prima, the brand new attraction of Norwegian Cruise Line has become the 'most in-demand ship ever' according to the brand. The growing appeal among travelers is based on the exciting amenities onboard ranging from the largest ever three-level go-kart racetrack to the world's first freefall dry slide.

The 965 ft long vessel capable of hosting 3,215 passengers at double occupancy was launched in May has been witnessing record bookings since. The ship was recently floated out for the first time at the Fincantieri shipyard in Venice on August 13, 2021.

Prima Speedway, the 420-meter long racetrack consisting of 14 sharp turns and open ocean views along the length has become the center of talks since the launch. The three-level track which is capable of accommodating 15 racers at a time is one of its kind at sea.

The ship offers another sporting adventure which provides a 10-story plunge along the side of the vessel in the form of, what is being dubbed as the world's first free-fall dry slide. Among various other amenities, like the gaming zone, the ship claims to hosts a first-ever three-story theatre which can be transformed into a nightclub as well.

Another significant feature of the vessel's design is the spaciousness offered in the form of Ocean Boulevard which will include an outdoor sculpture garden, a seaside walkway, and two infinity pools. The 44,000 sq. ft deck also consists of three restaurants, an open-air lounge, and two glass bridges.

The record booking for Norwegian Prima also narrates the nature of recovery being made in the cruise industry after the covid-19 pandemic. Arnold Donald, President of Carnival Corporation claims a lower 35% occupancy in the US but stronger rates in Europe. Industry experts expect 80% of the global cruise fleet to return by the end of the year.

Norwegian Prima is set to sail for the first time on 17th August 2022, from Amsterdam in the Netherlands to Reykjavik in Iceland.