International Transport Workers Federation has reported that a bulker has been abandoned with its crew still on board while the ship is now taking on pirate-infested high-risk zones near Somalia. The vessel in question is 1977 built Haj- Abdullah (IMO 7702114, flag state: Sierra Leone) and has 11 crew members trapped on board when the vessel developed cracks in the hull. The ship has been kept afloat by the crew only by pumping out water with the bilge pumps.

ITF reported that the vessel was transporting a shipment of sulfur from Dubai to Dar es Salaam, Tanzania when it developed cracks in the hull. ITF further stated that the ship had called at the Port of Mogadishu for supplies and inspection on August 31, but was never allowed to enter the port by the authorities; the ship has stayed anchored offshore since. ITF has contacted the insurer P&I club Thomas Miller so that the contingency of vessel abandonment could be used to provide repatriation to the workers along with the due salary of the last 4 months, however, extracting the workers won’t be possible without the assent of the Port of Mogadishu.

Such a situation of an abandoned ship is nothing novel. Languishing companies which are unable to sell the vessel or lack the funds to repair it are the usual suspects. However, this case stands out as the ship is anchored off the port of Mogadishu, which is known as a piracy-infested area in the shipping world. The ship is taking on water and the food rations have almost run out. The Lebanese owners of the ship are reportedly unresponsive, leaving the burden of responsibility on the flag and port states. 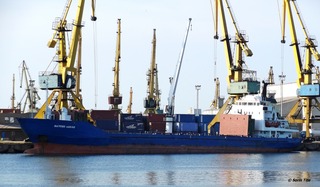