On November 18, 2021, DRI and Customs officials of India seized several containers at Adani-operated Mundra Port from a foreign vessel on suspicion of containers carrying undeclared hazardous cargo. The Directorate of Revenue Intelligence (DRI) and customs intercepted SHILING coming from Karachi, Pakistan, headed towards Shanghai, China, and redirected the vessel to Mundra Port. The customs and DRI teams boarded the Singapore flagged container ship at container terminal no. 4 of Mundra Port and later unloaded and seized the containers for further inspection.

Port operator Adani Group issued a statement on the incident, where it was said that the cargo was listed as Non-Hazardous while the seized containers had Hazard Class 7 markings, indicating radioactive substances on them. They stated that even though the containers were not destined for Mundra or any Indian port, they were offloaded.

Pakistan later issued a clarification on the containers. It reported that the containers seized by Indian authorities were empty but earlier used to transport fuel to Karachi from China for the K-2 and K-3 nuclear power plants. Pakistan authorities explained that K-2 and K-3 atomic plants were located in Karachi and used International Atomic Energy Agency complaints fuels.

Earlier in September, DRI had seized 2988.21kg of heroin at the Mundra Port from two containers coming from Afghanistan via the Bandar Abbas port of Iran. In the wake of the incident, port operator Adani had issued orders to stop handling export-import of containerized cargo originating from Pakistan, Afghanistan, and Iran. 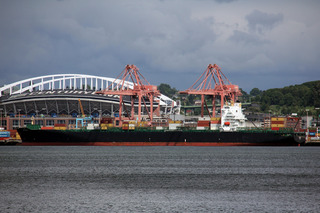 New Container Terminal Worth $1.64 Billion to Be Built in Port of Valencia