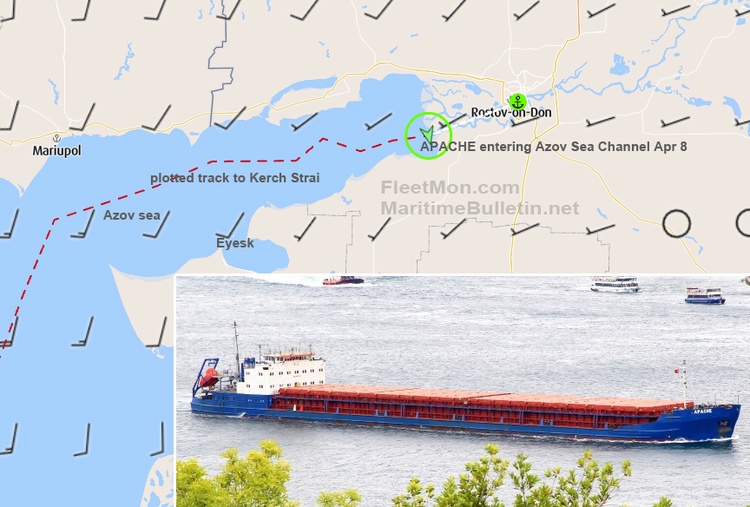 Russian media, citing Russian Ministry of Defence spokesperson Konashenkov, published a story worthy of being a thriller screenplay. The story took place late at night Apr 8, in Azov sea. According to Russian military command, Malta-flagged “Ukrainian” cargo ship APACHE (in statement and in publications the ship’s name was misspelled – APACHI, instead of APACHE) was proceeding from Taganrog Bay, eastern Azov sea, to Kerch Strait, in a convoy. At 2238 Moscow time freighter made a sharp turn and sailed in Mariupol direction, notwithstanding Mariupol sea blockade by Russian Navy, and VHF orders to return to convoy. From 2253 until 2330 Moscow time, the ship was shelled by Russian Navy and CG ships. Her stern was hit with ensuing fire. After that. Master of the ship called Navy and asked them to stop fire, agreeing to follow their orders. The ship was to be taken to Eyesk port, Azov sea, Russia, under military escort, “for investigation”. According to military, there were no casualties and no injures.
Russian military identified APACHE as Ukrainian ship, but she is owned and managed by Istanbul-based Turkish company MISHA SHIPPING. She left Rostov port, Don river, Russia, on Apr 8, bound for Bari Italy, understood in full load. Russian military command believe the ship was to evacuate from Mariupol the command of “extremist paramilitary battalion Azov”, and a number of mercenaries. Russian military command said signal fires were spotted along Mariupol coastline, while the ship was conducting intense radio communications.
It’s impossible to try to analyze ship’s track, because obviously, all merchant ships sailing to/from Russian ports in Azov sea, must switch off their AIS, during Azov sea transit. They all must proceed in convoys, understood escorted by, or controlled by, Navy and CG. So, it’s impossible to confirm or deny, if there really was an attempt to break through Mariupol blockade and reach besieged port. 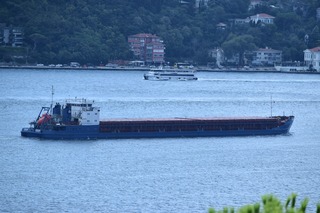