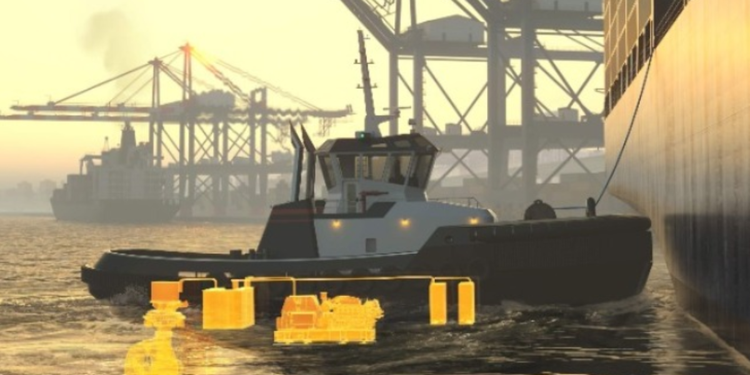 Maritime architecture firm Glosten, working with ABB has designed a hybrid drive, ship assist tug that can run on methanol. The idea behind the design is to provide operators with a tugboat that not only provides a viable path to carbon-neutral operations but also minimizes costs.

The tug named the SA-100 will have a length of 100 feet and will be powered by twin methanol-compatible CAT 3512E generators. These generators will be connected to electrically powered L drives and a set of battery banks. These battery banks are to complement the generator sets for zero-emission operation while transiting. These batteries will also work in tandem with the generators when the maximum bollard pull of 90 short tons is required of the tug.

Peter Soles, Conceptual lead for Glosten’s tug designs stated that they had three objectives while designing the tug and all of them were targeted toward benefitting the ship’s owner/operator. The first objective was to assure regulatory compliance and future adaptability. The second objective was to introduce meaningful improvement in environmental performance and the third objective was to control OpEx costs so that assist services could be offered at competitive rates.

Methanol is a promising alternative fuel that is gaining acceptance in the maritime industry. Methanol does not require cryogenic or pressurized storage like hydrogen and it can be used in conventional diesel cycle engines. Methanol also does not require any major modifications to existing systems for storage, transport, or use. Concerning methanol’s environmental impact, it is sulfur-free and produces fewer emissions of NOX and particulate matter than conventional diesel. If methanol is synthesized from renewable sources like biogenic carbon and green hydrogen, it is a zero-carbon fuel. Big players in the industry including Maersk are banking on Methanol as their choice of fuel moving ahead.